Learn more about how we work.

Work with the AIMC to establish math circles in your community.
Send us a note to get started.

AIMC was well represented at the AISES Annual Meeting in Milwaukee. Former math camp attendee, Sky Harper, won first place for his research poster and former math camp attendee and peer leader, Natanii Yazzie was inducted into the Sequoyah Fellows of AISES. Congratulations to both of you!  You make a difference! 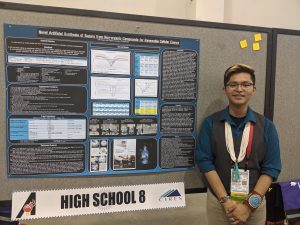 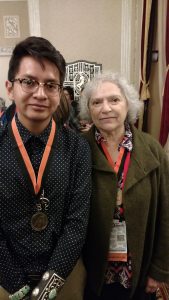 Read about the Development of AIMC

Bob & Tatiana’s recent article in the Notices of the American Mathematical Society is here: http://dx.doi.org/10.1090/noti1852

Our very own Tatiana making news by sharing great math with great students. See this link, from the Navajo-Hopi Observer for details!

Fowler and Klein Collaborate with the Kennedy Museum of Art

The AIMC’s Henry Fowler and Bob Klein, together with Sally and Perfelia Fowler, began work with the staff at the Kennedy Museum of Art, to co-curate a Spring 2020 exhibit that highlights connections between the Kennedy’s extensive 700+ collection of Diné weavings and the tapestries of mathematics. Details to follows, though pictures can be found on the Our Stories page. Many thanks to the amazing staff at the KMA for their generous willingness to share and to create together.

Check out this Scientific American article about a new podcast, called “My Favorite Theorem”, with Henry Fowler talking about his favorite theorem and its connection to his Navajo identity:

Learn more about our project.

Comments or questions are welcome.

We will reply as soon as we are able.